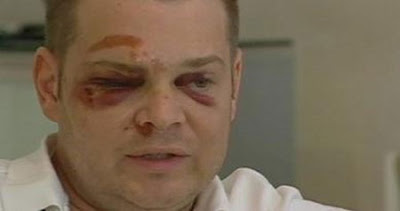 “Are You Looking At Me, Faggot?” More ugly Florida news today. A gay man was brutally beaten at the Floridian, a popular diner on Fort Lauderdale’s gorgeous Las Olas Boulevard, after his partner said “good morning” to another patron.

Police are searching for a man driven by hate, who beat a gay man and threatened him and his partner, after they finished a meal at an outdoor restaurant. The couple were dining at the Floridian restaurant on Las Olas Boulevard with a friend around 3 a.m. Saturday when they say a stranger verbally and physically attacked them. “I can barely see out of my right eye at this point, I got scrapes…” said Melbourne Brunner.

Brunner said he received the injuries from the stranger who walked by their table and targeted him for no other reason besides the fact that he is a gay man. Brunner said they tried to be cordial with the stranger when they first made eye contact. “He looked down at us, and my partner said, ‘Good morning,’ and that was it.” Brunner recalled, moments later, the man returned visibly upset. “He just started with this barrage, of, ‘Are you looking at me, you faggot? You know what I do to faggots? I break their necks!'”

After the verbal encounter, his partner and friend decided to ask for their check. They got up, left the restaurant and headed down the sidewalk to their car. That’s when the attacker followed them and made his move. “As I was almost into the car, the guy had made it down the sidewalk and had reached inside and grabbed the edge of the door,” explained Brunner. The verbal attack turned physical when Brunner stood up. “That’s when he hit me, and I landed face-down on the concrete.”

Mitchell Mart, the victim’s partner, went to render aid to Brunner and noticed his injuries. “I came down the street to pick him up and put him in the car and saw he was badly injured,” Mart said. “His forehead immediately swelled up, his eye closed, he was bleeding.”

Mart tried to get the attacker’s license tag number from his pickup truck, but the assailant went out of his way to keep it hidden. “He took off his shirt, covered his license plate, put down his tailgate,” he said. Brunner said the attacker then threatened them. “‘I’ll kill you before you get my tag number, you faggot!’ and jumped in his car, rolled down the window and was screaming, ‘That’s right, run, faggots, run.'”

Despite the attacker’s attempts to keep his identity hidden, the victims did give a detailed description to police. Authorities are looking for a newer model, four-door Toyota Tacoma with a metallic green color, chrome rims, a black roll bar and a black bed cover. The attacker is described as a white male, in his early 30s, with a muscular build, clean-cut hair, standing about 5 feet 9 inches to 6 feet tall.

The Floridian opened 63 years ago as a 24-hour diner and has been a popular destination for gay men for decades. I’ve eaten there countless times. It’s just about the safest place on the safest street you can imagine.

Previous Is Romney Rejoining The Race?
Next HomoQuotable – Andrew Sullivan