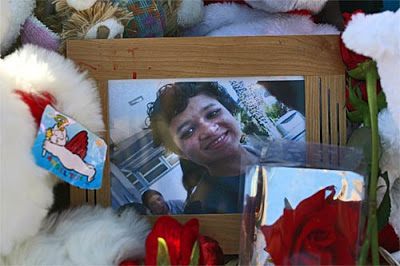 A total of over 1000 people gathered at two locations on Friday and Saturday in Oxnard, California to honor the memory of Lawrence King, 15, an openly gay middle-school student who was shot in the head last Tuesday by Brandon McInerney, a 14 year-old fellow 8th grader. New reports suggest that days before the shooting King may have told McInerney that he had a crush on him.

Along with his signature black, high-heeled boots and varying shades of lipstick, friends say he wore dramatic makeup and dressed more flamboyantly in the last two weeks before he was shot to death by a classmate at an Oxnard middle school.

The cosmetics added a quirkiness to his personality, friends said. But they didn’t define the 15-year-old boy Melissa Castillo knew. “He didn’t know he had a lot of friends,” Castillo said. “We all thought he was funny but not in a mocking way. We all really liked him. I wish he knew that.” Castillo was standing with four of her friends at a candlelight vigil to honor Larry King, held in Ventura Friday night.

The 15-year-old E.O. Green Junior High School eighth-grader was perceived by classmates as a gay or cross-dressing student who had been bullied. “He didn’t have to tell me; I saw it. We all saw it,” Castillo said. A separate memorial was organized by students. Via the Los Angeles Times:

The Goths in their black T-shirts were there. So were the punks with fluorescent hair and multiple piercings. There were even a few adolescent boys carrying skateboards among the nearly 1,000 Oxnard youth and other supporters who turned out Saturday for a hastily organized peace march to pay tribute to Lawrence King, 15, the Oxnard student shot to death in a classroom last week.

“Larry, Larry, Larry!” the crowd chanted before marchers clasped hands in a moment of silence for the fallen student.

There were no bullhorns, no speeches and no politicians. Just a mass of mostly adolescents wearing bright clothing, carrying signs and singing John Lennon’s “Imagine” and “Give Peace a Chance.”

The size of the turnout surprised police, school officials and even the two Hueneme High School sophomores who put the event together just three days ago, spreading the word with fliers, cellphone calls and MySpace bulletins.

“We were expecting maybe 100 or 200 people,” said Courtney LaForest, 16, as she gazed at a broad “peace circle” formed by march participants at Plaza Park in downtown Oxnard. “This is incredible.”

Courtney said the turnout reflected a community’s anguish over a senseless shooting that has destroyed the lives of two young men. It was also a public plea for tolerance on school campuses for those who are different, she said.

“I didn’t know Larry. A lot of people here didn’t know him,” she said. “We are saying you don’t need to accept people who are gay, but you should tolerate them.”

King, an eighth-grader at E.O. Green Junior High School in south Oxnard, had revealed he was gay this school year. In recent weeks, he had begun accessorizing his school uniform with feminine items and was often teased by other students, several of his classmates said.

“What he did was really brave — to wear makeup and high-heeled boots,” said Erin Mings, 12, who hung out with King at the school. “Every corner he turned around, people were saying, ‘Oh, my god, he’s wearing makeup today.'”