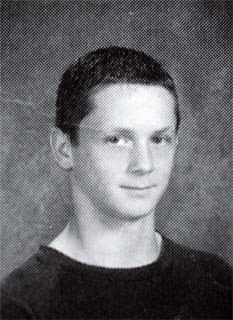 Ventura County, California prosecutors have declared that the shooting of Lawrence King by 14 year-old Brandon McInerney (left) was a premeditated hate crime.

McInerney’s family was in a Ventura courtroom Thursday as the adolescent was brought into a holding chamber to face charges. His arraignment was delayed to give his attorney time to review the police investigation before entering a plea.

McInerney was charged with premeditated murder with enhancements of use of a firearm and a hate crime. Because he is a minor, McInerney will remain in Juvenile Hall and be taken to the Ventura courtroom for court appearances, Fox said. He is being held in lieu of $770,000 bail. If convicted, McInerney could face 50 years to life. The hate crime enhancement would add another one to three years to his sentence.

McInerney turned 14 only three weeks ago, passing the California legal cut-off age for being charged as an adult.

There will be a memorial vigil for Lawrence King tonight at 7pm at The Art Barn in Ventura, CA. A memorial donation fund has been set up:

Previous HD-DVD, We Hardly Knew Ye
Next More Comedy From The CWA