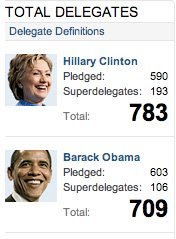 Clinton’s big win in California came via women, older voters, Latinos, and gays – who voted Hillary by more than a 2-1 margin there, taking 60% to Obama’s 25%. I knew that Clinton would win the gays, but didn’t anticipate such a huge margin.

It’s still a horse race, 2025 delegates are needed to secure the nomination.