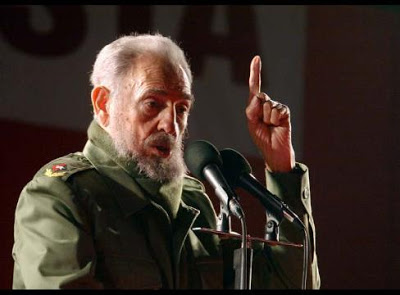 A few people waved flags or honked their cars’ horns, but little jubilation seemed evident as regular customers trickled into the Versailles and other restaurants and open-air coffee stands along Calle Ocho, Little Havana’s main artery.

”I think people have accepted that he’s sick, he’s going to die,” said Jose Lazcano, who left Cuba in 1965 when he was 4 years old. “We’ve gotten used to the idea.” Said Ray Orozco, an attorney who lives in the Brickell area: “It’s not just Fidel. There’s an entire infrastructure in place there.”

But Garcia and others noted that Castro’s brother and heir, Raúl, already has signaled a modest tendency to consider reform — and cannot remain in power for very many years. ”I think this decision symbolizes possible change in the short term because even Raúl is already 75 years old,” Garcia said. “You can see it coming. In a year, more or less, we will see a transformation of things in Cuba.”

At least one Spanish-language radio station accompanied the news by playing songs of ”libertad” — liberty. ”El Aguila” is out, announcers at 92.3 FM announced, referring to Castro by one of his many nicknames, the Eagle. Calls immediately flowed into the station. “Miami is eager for the end to Raúl and Fidel Castro and for there to be change,” the announcer said in Spanish. Most other Spanish-language stations reported the news without embellishment.

This time last year when Castro appeared near death, the city of Miami planned to stage a giant party in the Orange Bowl when he died, so as to draw potentially violent celebrants off the streets.