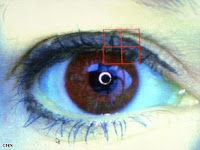 The Minority Report is coming true.

The FBI is gearing up to create a massive computer database of people’s physical characteristics, all part of an effort the bureau says to better identify criminals and terrorists.

The FBI wants to use eye scans, combined with other data, to help identify suspects. But it’s an issue that raises major privacy concerns — what one civil liberties expert says should concern all Americans.

The bureau is expected to announce in coming days the awarding of a $1 billion, 10-year contract to help create the database that will compile an array of biometric information — from palm prints to eye scans.

Kimberly Del Greco, the FBI’s Biometric Services section chief, said adding to the database is “important to protect the borders to keep the terrorists out, protect our citizens, our neighbors, our children so they can have good jobs, and have a safe country to live in.”

“It’s the beginning of the surveillance society where you can be tracked anywhere, any time and all your movements, and eventually all your activities will be tracked and noted and correlated,” said Barry Steinhardt, director of the American Civil Liberties Union’s Technology and Liberty Project.

Fly Clear was just the beginning.

Previous Ass Wednesday
Next Fox News Headline Of The Year