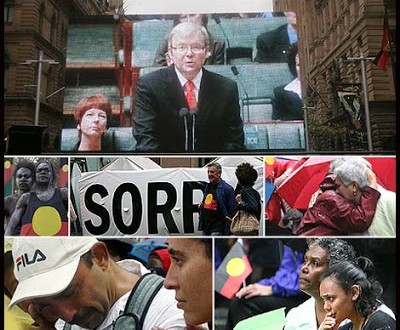 Australian Prime Minister Kevin Rudd read a 361-word apology to the aboriginal people of Australia today for his country’s history of forced assimilation, a policy which removed aborigine children from their homes and gave them to white parents.

Based on the premise that “full-blood” Aborigines were a race headed for extinction, up to 100,000 mixed-race children were taken from their parents between 1910 and 1970. The children, some of them babies, were often snatched from sobbing mothers by policemen or government officials.

Rudd described the national mea culpa as “removing a stain from the soul of Australia”. Local press describes the apology as similar to that given by the United States to Japanese-Americans for their forced internment during World War II.

Rudd’s predecessor, the Bush-lackey John Howard, had refused to apologize for the snatched children, saying Australia had “no need to atone for past injustices.”