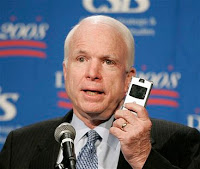 John McCain’s campaign is homophobo-robo-calling Florida voters to put the fear of Jeebus in them regarding Mitt Romney’s former support for gay rights. The transcript of the call:

“We care deeply about traditional values and protecting families. And we need someone who will not waver in the White House: Ending abortion, preserving the sanctity of marriage, stopping the trash on the airwaves and attempts to ban God from every corner of society. These issues are core to our being.

“Mitt Romney thinks he can fool us. He supported abortion on demand, even allowed a law mandating taxpayer-funding for abortion. He says he changed his mind, but he still hasn’t changed the law. He told gay organizers in Massachusetts he would be a stronger advocate for special rights than even Ted Kennedy. Now, it’s something different.

“Unfortunately, on issue after issue Mitt Romney has treated social issues voters as fools, thinking we won’t catch on. Sorry, Mitt, we know you aren’t trustworthy on the most important issue and you aren’t a conservative

Message: “Hey, I hate fags WAY more than HE does. Therefore I should be leader of the free world.” What a country.