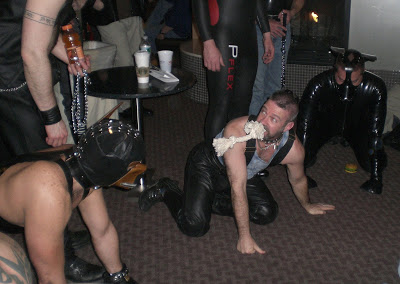 Here’s a few pics from MAL 2008, including some from the puppy play party that you’ve been clamoring for. The guy with the rope in his mouth wasn’t wearing all the gear that the other puppies were, but he was the most fun one to watch, maybe because we could see his face. Method acting.

I don’t do many of these leather events anymore – I haven’t been to IML since 2000 and this was my first MAL in five years. With the advent of puppy play and a few other burgeoning fetish scenes, these events make me feel super-vanilla. You’re standing there listen to a group of guys chatter excitedly about what they might wear to the underwear party and you think, “Oh. I didn’t bring any “show” underwear.” Not that I have any. And when I told somebody that I wasn’t wearing chaps because I’d “outgrown” mine, he suggested that everybody should keep around a pair of “fat chaps”. Well, I’ve definitely got a pair of fat jeans. Somebody else floated the concept of Sansa-belt chaps. Shudder.

So aside from hanging out in the lobby of the host hotel, I pretty much skipped all the events, including the pageant itself, even though I was rooming with Mr. Fire Island Leather 2007. And that title wasn’t handed to him on a silver platter. He worked for it. (Anyone? Anyone?) Here’s a brief clip of the dance floor of the closing party Reaction Dance at 9:30 Club. As with my Saint NYE video, the audio is totally borked.

I had a great time at the Reaction Dance, although the evening started out with the usual gay disco coat-check disaster when the upstairs coat-check became full and closed abruptly, sending the livid crowd (who’d been already been waiting 45 minutes) downstairs to wait in another long line. Ooh, people were screaming.

DJ Warren Gluck, who I hadn’t heard since the ill-fated and one-time-only Los Angeles Morning Party in 1998, was great. I forgot to bring my notepad, but here’s a short list of what I can recall Gluck playing: Frankie Goes To Hollywood – Welcome To The Pleasure Dome, The O’Jays- Love Train, Ram Jam – Black Betty, Chimera – Show Me Heaven, Sunscreem – Outlaw, and the classic anthem of Hillside Campground, I Just Wanna Fuckin’ Dance. On the way into the party, a carload of black girls spotted this guy waiting in the line and pulled over to scream, “Work them heels, bitch! WORK ‘EM!” The gentleman in question turned around and and said, “I beg your pardon?” Totally cracked up everybody in line. A great moment. And he totally has the legs for the outfit.

All in all, it was a great weekend. Even though I’m definitely far on the periphery of the “scene”, I was surrounded by dear friends at all times. And what more can you ask than that?