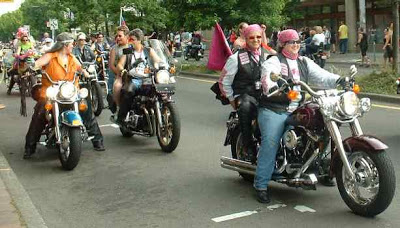 The U.S. Supreme Court today turned away a challenge to the trademark application by Dykes On Bikes, the traditional lead group at gay pride parades nationwide. The trademark was challenged by a men’s rights advocacy lawyer who claimed the term denigrated men and was “scandalous and immoral” – grounds for denying a trademark. Dykes On Bikes applied for a trademark several years ago in order to stop an offshoot group from selling t-shirts.

In his challenge, Michael McDermott of Dublin, California charged that men were illegally excluded from the streets during the annual Dyke March and that awarding the trademark would be contrary to “widespread documented understanding of the term ‘dyke’ as describing hyper-militant radicals hateful toward men.”