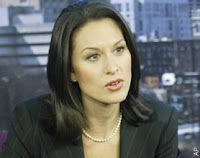 Alycia Lane, the Philadelphia CBS newscaster arrested last month during a traffic altercation in which she called a female cop a “dyke bitch” has been fired. From the KWY-TV president: “After assessing the overall impact of a series of incidents resulting from judgments she has made, we have concluded that it would be impossible for Alycia to continue to report the news as she, herself, has become the focus of so many news stories.”