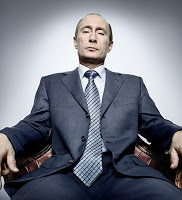 Vladmir Putin: Person Of The Year 2007 Russia president Vladimir Putin has been named Time Magazine’s Person Of The Year.

Putin is not a boy scout. He is not a democrat in any way that the West would define it. He is not a paragon of free speech. He stands, above all, for stability—stability before freedom, stability before choice, stability in a country that has hardly seen it for a hundred years. Whether he becomes more like the man for whom his grandfather prepared blinis—who himself was twice TIME’s Person of the Year—or like Peter the Great, the historical figure he most admires; whether he proves to be a reformer or an autocrat who takes Russia back to an era of repression—this we will know only over the next decade. At significant cost to the principles and ideas that free nations prize, he has performed an extraordinary feat of leadership in imposing stability on a nation that has rarely known it and brought Russia back to the table of world power. For that reason, Vladimir Putin is TIME’s 2007 Person of the Year.

HIGHLY RECOMMENDED: Go to Towleroad where Andy Towle has compiled a comprehensive look at what gays have had to deal with under Putin over the last year. As Andy put it in an email, it ain’t pretty.
.