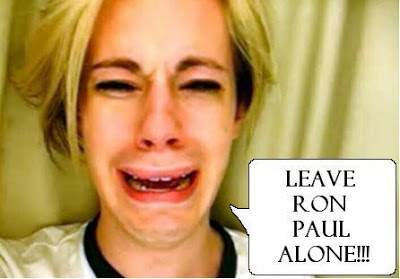 The Ghost Of Racism Past
(And Probably, Present) A Ron Paul golden oldie is making the rounds on progressive blogs again. From his 1992 newsletter, the Ron Paul Survival Report:

Indeed, it is shocking to consider the uniformity of opinion among blacks in this country. Opinion polls consistently show that only about 5% of blacks have sensible political opinions, i.e. support the free market, individual liberty, and the end of welfare and affirmative action…. Given the inefficiencies of what D.C. laughingly calls the “criminal justice system,” I think we can safely assume that 95% of the black males in that city are semi-criminal or entirely criminal.

If similar in-depth studies were conducted in other major cities, who doubts that similar results would be produced? We are constantly told that it is evil to be afraid of black men, but it is hardly irrational. Black men commit murders, rapes, robberies, muggings, and burglaries all out of proportion to their numbers.

Poor Ron Paul. This story resurfaces every few years even though he’s claimed that the above was written by a ghostwriter who was later fired. Four years later. Oh, and Paul has always refused to identify said ghostwriter. Must be why the story still has legs, huh?
.