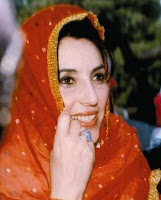 RAWALPINDI, Pakistan – Pakistani opposition leader Benazir Bhutto was killed Thursday in a suicide attack as she drove away from a campaign rally just minutes after addressing thousands of supporters, aides said.

The attacker shortly after Bhutto addressed the rally in the garrison city of Rawalpindi. There were conflicting accounts over the sequence of events.

Rehman Malik, Bhutto’s security adviser, said Bhutto was shot in the neck and chest by the attacker, who then blew himself up.

Party supporter Chaudry Mohammed Nazir said that two gunshots rang out when Bhutto’s vehicle pulled into the main street and then there was a big blast next to her car.

But Javed Iqbal Cheema, spokesman for the Interior Ministry, told state-run Pakistan Television that Bhutto died when a suicide bomber struck her vehicle. At least 20 others were killed in the blast, according to an Associated Press reporter at the scene.

Bhutto was rushed to the hospital and taken into emergency surgery. “At 6:16 p.m. she expired,” said Wasif Ali Khan, a member of Bhutto’s party who was at Rawalpindi General Hospital.

The death of the charismatic former prime minister threw the campaign for the Jan. 8 election into chaos and created fears of mass protests and an eruption of violence across the volatile South Asian nation.

Horrible, horrible news. Pakistan was already teetering on civil war and now their major cities are in complete chaos. (They’ve got nukes, you know.) Bush has been pouring billions into Pakistan to prop up Musharraf’s regime. This news will surely have an effect on our presidential race, not to mention the stock market.
.