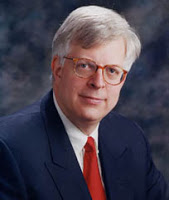 Through the magic of Free Republic’s homo-obsession, I came across this 1993 article by Jewish theologian Dennis Prager. You may recall Prager as one of the “insider” architects of the Defense Of Marriage Act, in support of which he testified before Congress in 1996. Prager begins with this premise:

To appreciate the extent of the revolution wrought by Judaism’s prohibiting homosexuality and demanding that all sexual interaction be male-female, it is first necessary to appreciate just how universally accepted, valued, and practiced homosexuality has been throughout the world.

The one continuous exception was Jewish civilization — and a thousand years later, Christian civilization. Other than the Jews, “none of the archaic civilizations prohibited homosexuality per se,” Dr. David E. Greenberg notes. It was Judaism alone that about 3,000 years ago declared homosexuality wrong.

And it said so in the most powerful and unambiguous language it could: “Thou shalt not lie with mankind, as with womankind; it is an abomination.” “And if a man lie with mankind, as with womankind, both of them have committed an abomination.” It is Judaism’s sexual morality, not homosexuality, that historically has been deviant.

If consensual homosexual activity is valid, why not consensual incest between adults? Why is sex between an adult brother and sister more objectionable than sex between two adult men? If a couple agrees, why not allow consensual adultery? Once non-marital sex is validated, how can we draw any line? Why shouldn’t gay liberation be followed by incest liberation?

Prager concedes “one could argue that people are naturally (i.e., biologically) bisexual (and given the data I have seen on human sexuality, this may well be true)”. But the real eye-roller comes here:

When male sexuality is not controlled, the consequences are considerably more destructive than when female sexuality is not controlled. Men rape. Women do not. Men, not women, engage in fetishes. Men are more frequently consumed by their sex drive, and wander from sex partner to sex partner. Men, not women, are sexually sadistic.

Women doen’t have fetishes or engage in S/M? That’ll be a shocker to the female doms that read JMG. With so many major Christian leaders recently dead, resigned, or in one sexual scandal or another, expect twice-divorced Prager to feature more prominently in future religion-led attacks on same-sex marriage.

Previous Did He Really Want To Hurt Him?
Next Manhattan Monday