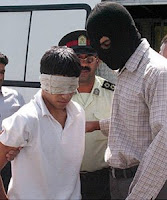 THIS WEEK: In a private meeting with British members of Parliament, an Iranian official has said that gays in Iran deserve to be tortured and executed. Mohsen Yahyavi is the highest-ranked Iranian politician to admit that that the death penalty for homosexuality exists in Iran. Last year the hanging of two teenage boys for alleged homosexual crimes caused an outcry when photos of the boys made it onto the internet.

Imposing the death penalty for crimes committed by juveniles is prohibited under international law as well as by the Iranian legal system. In addition, IGLHRC calls on the international community to condemn the use of the death penalty as a punishment for any sex or morality-related crime, whether consensual or non-consensual, as unnecessarily extreme. In this case, since none of the alleged victims ever claimed to have been raped, and all of them admitted to the court that their initial accounts of sexual intercourse with Makvan were false and had been acquired under coercion, the imposition of the death penalty is especially objectionable.

As an organization dedicated to defending the rights of sexual minorities worldwide, the International Gay and Lesbian Human Rights Commission (IGLHRC) objects to any law, policy or ruling that penalizes consensual homosexual relationships among adults.

IGLHRC requests that you send letters in English or Persian to the following Iranian officials, demanding that the order of execution in the case of Makvan Mouloodzadeh be withdrawn:

Please also email a copy of your correspondence to IGLHRC at: [email protected] LAST YEAR: I attended a vigil at the Iranian consulate here in NYC, where many progressive groups protested the hanging executions of two gay Iranian youth. Cynics may say that last year’s protest and this current one is a wasted effort, and maybe they’re right, but please go the IGLHRC’s site, copy their sample letter, and send it to the addresses listed above. It won’t take you two minutes.