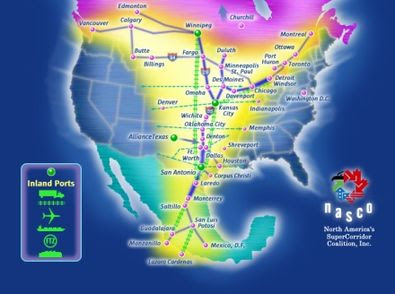 I Met Jeebus At A Truckstop Have you heard the one about the Christianists who believe that Interstate 35 is the key to the secret conspiracy to unite Mexico, Canada and the U.S. as a single nation? Oh, but on the other hand, I-35 can be used to “set people free” from homosexuality!

The concept of a behind-the-scenes “North American Union”—persistently advanced by Joseph Farah’s WorldNetDaily, the John Birch Society, CNN’s Lou Dobbs, presidential candidates Ron Paul and Tom Tancredo, and others—is closely tied to the anti-immigrant sentiment that has struck right-wing politics over the last few years. But it has taken on a life of its own, thanks to vivid imagery like “the plan to build a huge NAFTA Super Highway, four football-fields-wide, through the heart of the U.S.” that was alleged in detail by Jerome Corsi last year. Corsi even provided a now-iconic picture, taken from a transportation-industry lobbying group.

The wingnuts believe that I-35 is not only mentioned in scripture (Isaiah 35, verse 8: “And a highway will be there, it will be called the way of holiness.”) but that it is the key to purging America of abortion and homosexuality. You’ve GOT to watch this clip from 700 Club in which some queen claims that at an I-35 “purity siege” outside a Texas gay bar, he was cured of his pole-smoking when a pastor touched him and shouted, “Fire!” With all these right-wingers at reststops, the toe-tapping must be deafening.

Tags I-35 People For The American Way religion wingnuts