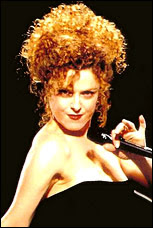 Broadway’s Back! A free concert celebrating the return of Broadway takes place today at noon at the Marriott Marquis Theatre in Times Square. Appearing: Bernadette Peters, Angela Lansbury, Bob Martin, Fantasia, and cast members from every Broadway show. Midtowners: take your lunch early today, doors open at 11:30am for Broadway’s Back! The show will be broadcast live on Sirius 77, with many repeats scheduled over the weekend.

The Little Mermaid resumed its previews last night, the official opening is now January 10th. The new opening night for Mark Twain’s Is He Dead? is now December 9th.

Discount tickets are available for many shows this weekend, as thousands of travelers have already canceled their Broadway plans.

Previous Title: A Pun On Uruguay
Next Rappin’ Mike Gravel