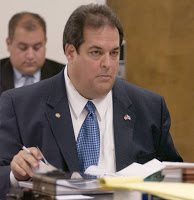 Florida Republican legislator Bob Allen was convicted Friday of solicitation of an undercover officer. He faces 60 days in jail, a $500 fine, and will likely be immediately removed from the legislature. In July, Allen was arrested in a public park near Titusville, Florida after offering to pay an undercover cop $20 if Allen could blow him.

After his arrest, Allen protested, “I’m not in anyway associated with that they are saying, this is disgusting.” He later told investigators that he only “played along” with the undercover cop because he feared black men.

In 2005, Allen told right-wing Christian site World Net Daily about his “Sexual Predators Elimination Act” which sought mandatory life without parole sentences for those designated as sexual predators. Allen’s now-ironic statement to WND: “We can get away from all those expensive law-enforcement time-wasting factors by simply going straight to the root of the problem, and that is the offender, and put them in a locked up place where we know we’re safe.” The bill was strongly opposed by the Florida ACLU and did not pass.

Oh, and Bob Allen is the local Police Union 2007 Legislator Of The Year. Heh.
.