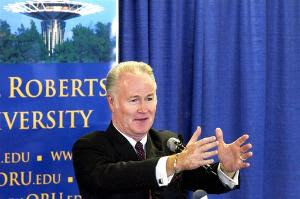 Richard Roberts, president of Oral Roberts University, has requested a leave of absence as allegations from all corners continue to roil his administration. Roberts’ wife Lindsey is said to have spent the night in an ORU guest house with an underaged male on nine occasions. She has also been photographed with an underaged male in her sports car 29 times. Lindsey: “I live my life in a morally upright manner and throughout my marriage have never, ever engaged in any sexual behavior with any man outside of my marriage as the accusations imply.”

Richard Roberts has been accused of using donations for lavish renovations of their home and for illegal participation in a local political campaign, which would jeopardize the school’s non-profit status. Roberts also allegedly had financial records shredded after firing the school’s comptroller.

The son of the university’s namesake, famous pioneering televangelist Oral Roberts, Richard says that God told him to deny the charges. God: “We live in a litigious society. Anyone can get mad and file a lawsuit against another person whether they have a legitimate case or not. This lawsuit … is about intimidation, blackmail and extortion.” God talks fancy these days.