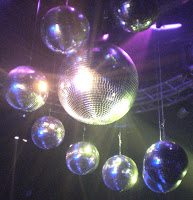 I’ve started this post several times over since I got back from last week’s Trocadero Transfer 30th anniversary Remember The Party event in San Francisco. I usually get my event reviews up pretty quickly, but not this time. Part of the delay was due to difficulties in getting the video below uploaded from my camera, but I think that a bigger issue was that I’ve been luxuriating in the afterglow from one of the most magical events I’ve experienced in the last few years, and that having the post “in the works” was sort of keeping it alive for me. Weird, huh?

Last Sunday, after walking around the Castro Street Fair for four hours, my host Leif (the Hot House hottie) and I went back to his place to relax for a bit, then headed for the venue, original site of the Troc, now the Glas Kat, arriving shortly before the 6pm door opening. We walked up on a line of men and women largely in their late 40’s to early 60’s, all chattering excitedly and trading Troc memories. Our old SF buddy Bill (aka DJ Trainwreck), in from Chicago for the party, joined us in line. Inside the door, party producers Chris and Richard had staffers handing out strands of costume pearls, in honor of the Troc’s pearl anniversary.

DJ Jerry Bonham, whom I’ve mentioned here many times as my favorite DJ in the world, was only four songs into his nine-hour set and the dance floor was already crowded, as it would remain for the rest of the night. The lighting crew had recreated the original Troc mirror ball assembly, the disco fog was blasting, and the capacity crowd was smiling, smiling, smiling.

Many stars of gay disco were in the house: performers, producers, DJs, and light techs. Seen: still humpy Megatone singer Paul Parker (here’s a 1983 video of hawt Parker performing Right On Target at the Saint), Lester Temple, DJ Larry Sanders (Fire Island, Sandpiper), Rod Roderick, DJ David Nathan, DJ Phil B, and Australia’s superstar DJ Paul Goodyear, with whom I had a brief chat and who later took center stage in an amazing mirrorball dinner jacket as the original Troc lighting crew (Chris, Bob, and Carla) trained spotlights on him, to the roaring approval of the crowd.

I met lots of JMG readers over the course of the night, many of whom had flown in expressly for the party. At one point, RTP producer Richard pointed out original Troc DJ Steve Fabus on the dance floor and I impulsively lunged towards Fabus to ask for a picture. The handsome young man dancing with Fabus (and there were a surprising number of under-40s guys in the crowd) stared at me for a second, then said “Are you Joe?” He turned out to be regular JMG commenter M00nchild, whom I’d always pictured as an aging East Bay hippie. So not.

M00nchild turned out to have a freakishly encyclopedic knowledge of gay disco for someone so young, which he demonstrated to me many times over the next few hours. You really must read his poignant review of the party from the perspective of one of the younger guys there. An excerpt:

Watching these beautiful older gay men around me dance, their lips moving to every song, their movements hitting every break, brought tears to my eyes. So many — if not all of them — were survivors. To get to this point, dancing at this party, to music that was so clearly special and full of memories, they had to have walked through unbelievable loss and challenge. It was a privilege to dance with these men all moving in unison, face to face, cheek to cheek, one to one, man to man.

Boy, M00nchild really nailed that, didn’t he? Buried in all that joy, all that dancing, all that singing along, was the subliminal undercurrent of a requiem dance, a faint funereal drumbeat keeping a second, haunted rhythm. You wouldn’t notice it as a casual observer, but a keen eye could see it there occasionally, fleetingly, in the song transitions. That’s when a dancer would momentarily zone out, face gone slack, eyes averted. His feet would be moving at 130 bpm, but his mind was spinning much faster, as a particular song slammed him back to 1983 or some other magical, youthful, lusty year when he once danced to that song with a beautiful young man, now long gone. But after a moment, the dancer’s partner would knowingly touch him on the arm, he’d blink, nod, and return to the now, feet moving more forcefully, jumping a little bit higher. Like a New Orleans jazz funeral, this is how gay men of my generation grieve, how we venerate The Lost. We do it by dancing. And it’s a beautiful, moving, celebratory thing, free of cloying sentimentality. I wouldn’t trade it, or the memory of last Sunday, for anything in the world.

In homage to original Trocadero Transfer DJ Bobby Vitteriti, Jerry closed the night with Pachabell’s Canon In D Major, as Vitteriti did so many times, decades ago. And we middle-agers (and some older and some young’uns) hugged the strangers we’d danced next to for the previous nine hours as Jerry’s applause rolled on and on. Feet were sore, backs ached, throats were hoarse, but ah, how our souls were refreshed. A spiritual catharsis, an emotional rebalancing, had been achieved, something unattainable by years on some therapist’s couch. But like any mood equalizer, the effect is transitory. I think I’ll need another fix in exactly twelve months.