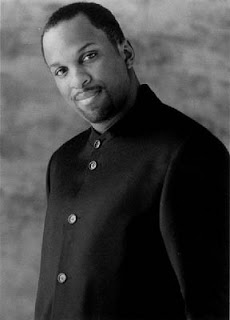 This didn’t take long. Clay Cane has posted an interview with an unnamed man claiming to have been “ex-gay” Rev. Donnie McClurkin’s lover from 2001-2004, the height of the period during which McClurkin was making his anti-gay rants. McClurkin is still slated to appear at Sen. Barack Obama’s fundraisers in South Carolina, despite a general outcry from gay activists.

According to Cane’s source, McClurkin enjoys “rough play” as a submissive bottom and used to patronize the X-rated Show Palace, a now-closed gay strip club on 8th Avenue near Times Square. However, McClurkin didn’t avail himself of the Show Palace’s glory holes, telling his playmate, “I wouldn’t stick my six inch, small dick through a glory hole.”

McClurkin’s ex, who says the two had sex once or twice a month for several years, describes the “ex-gay” reverend’s body in detail, and calls McClurkin a sex addict. When confronting McClurkin on his anti-gay rants, the source says McClurkin told him, “I have a problem. I don’t want people to believe that I’m still doing it.”

Read the rest of the (rather long) interview. Grain of salt, unnamed source and all that, but the details in the story ring of believability. The source says he last saw McClurkin earlier this year in a Manhattan restaurant. The “ex-gay” rev was allegedly in the company of an attractive, effeminate man. Yup.
.