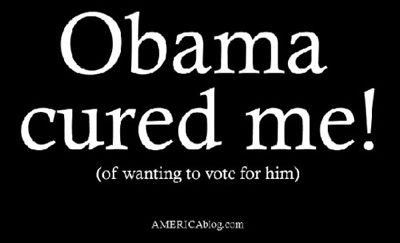 Notice at the 0:55 mark how Obama refers to the McClurkin controversy as happening “a while back.” Uh, yeah. Waaaay back on Sunday. Spin, spin, spin.

Also from the same forum, but not in the clip:

Appearing at the Cedar Rapids Public Library, Abbi Swanson whose son is gay, asked what he would do to give him the same rights as opposite-sex couples. “You want the word marriage and I believe that the issue of marriage has become so entangled – the word marriage has become so entangled with religion – that it makes more sense for me as president, with that authority, to talk about the civil rights that are conferred [with civil unions]” he told her.

Both Swanson and Lamb later told the Des Moines Register they were not satisfied with Obama’s position. “I’m not completely satisfied that he’s not for gay marriage … but I’m happy he does believe in equal rights for gay citizens,” Lamb said.
Swanson told the paper, “There isn’t an electable candidate out there that has given me the answer I want, which is everything.”

We’re not going to get “everything”, but we should at least demand that candidates who purport to support most gay issues not hand the microphone over to the “ex-gays”. When the McClurkin issue first reared up, I was perplexed, then disappointed. Now I’m just pissed.

The t-shirt now on sale at AmericaBlog: Previous The Dwindling Gayborhood
Next Married Straight Stud For Same