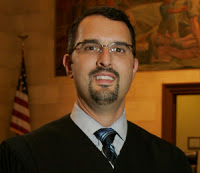 “Though lots of people know I’m gay, the coming-out process really doesn’t end. It’s important to be who you are and to be happy with yourself. Many other courageous people came out before me. Being gay doesn’t define who I am or impact my job in any tangible way, but maybe I can be a role model for some gay kid or inspire someone to get involved in politics.” – Daniel Anders, who took the oath today as the first openly gay man to become a judge in Philadelphia. The very positive story in the Philadelphia Inquirer ends with, “Wonder Woman and her lasso of truth have arrived. All rise.”