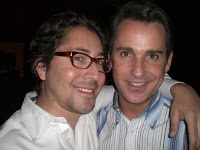 Last night Paul and I went to HX Magazine’s 16th anniversary party at Lotus. Lots of gay publishing types were in the house, including Genre editor Neal Boulton (former editor of Men’s Fitness) and Genre VP and publisher Bill Kapfer (pictured). Lady Bunny and Robin Byrd were cutting up in a corner, but I didn’t get a chance to grab a shot of them. After the open bar ran out and Lotus returned to its usual outrageous prices ($12 well, $10 beer), we popped over to Gym Bar to find a party for the Team New York Aquatics underway. Oddly, swimmers eat a lot of pizza, judging by the stack of boxes. I chatted briefly with one of the TNYA players, the statuesque Eyal Feldman (pictured), owner of lube company Boy Butter, whom I met at my last reading. After a drink at the deserted View Bar and another at the crusty, but always busy, Rawhide, I had to pack it in. It was only 11pm, but school night and all that.

Since it was a nice night, I decided to trudge all the way back to the 6 train at Union Square. (Also, I detest the L.) Somewhere around Broadway, I was waiting to cross the street when my head was turned by some high-pitched squealing. In a vestibule, two teenage Latinas were engaging in some public girl-on-girl action. Seeing me look over, one of them screeched, “Wassa matta Grampa, ain’t you never seen no hot bitches in love?”