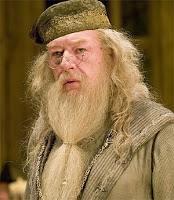 After reading briefly from the final book, “Harry Potter and the Deathly Hallows,” she took questions from audience members. She was asked by one young fan whether Dumbledore finds “true love.”

“Dumbledore is gay,” the author responded to gasps and applause.

In 2005, Pope Benedict Evilictus said that the Harry Potter series contains “subtle seductions which act unnoticed and by this deeply distort Christianity in the soul before it can grow properly.” Some Christianists have long complained that Rowling’s books encourage children to dabble in the occult and embrace Satanism. And now Dumbledore is to be counted among The Men Who Know Colors. Hopefully the next movie will incorporate another trans-(heh)-figuration scene. “Poof! You’re a poof!”