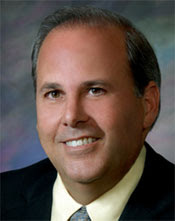 Damn. What IS it with these wacky Republicans? They are doing so much toe-tapping, we’ve got us a kick-line from one end of the Mississippi to the other. Joey DiFatta, 53, running for the Louisiana state senate, was revealed last yesterday to have been detained twice for suspicion of Craigian conduct. Once for peeking at a man through a stall in a Mervyn’s bathroom, once for toe-tapping in a Dillards.

In the second incident, Jefferson Parish deputies working an undercover detail in a men’s bathroom at Dillard’s at Lakeside Shopping Center in March 2000 stopped DiFatta after he indicated a desire to engage in sex with an undercover deputy in an adjoining bathroom stall, according to an interoffice memorandum written by Sgt. Keith Conley, one of the deputies involved in the investigation.

The report said DiFatta slid his foot into the deputy’s stall and tapped the deputy’s foot. In the report, Conley noted that such activity is common among men to indicate a willingness to participate in sex.

The deputy inside the stall, Detective Wayne Couvillion, responded by tapping his foot, and DiFatta reached under the partition and began to rub the deputy’s leg, the report states.

The detective asked DiFatta, “What do you want?” according to the report, and he replied, “I want to play with you.”

DiFatta also used a hand signal to indicate that he wanted to engage in sex and used language that indicated the same, according to the report. Conley, who is now the Kenner city attorney, confirmed the report’s authenticity Thursday.

DiFatta is unmarried, with two grown sons and four grandchildren. One of his campaign promises is to “Protect our convervative values from attacks by extreme liberal groups.”