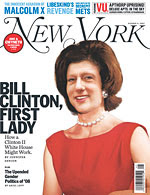 The latest New York Magazine has a great story about the role Bill Clinton would play in a Hillary adminstration. Contrary to Hillary’s time as First Lady, when she had an office in the West Wing and helped formulate key social policies, Bill would have to be as absent as possible from the White House, lest Hillary be viewed as a mere co-president.