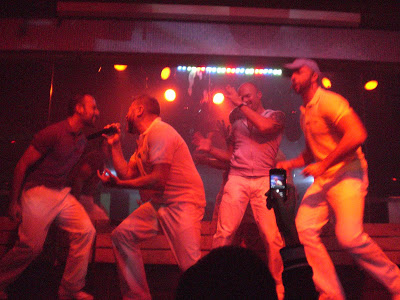 Last night Aaron, Chris and I caught BearForce1, “the world’s only bear band”, at Splash. The guy on the left in my fuzzy pic appears to be a new member, he’s not in the video for BearForce1’s hit song, which already has almost 1 million views on YouTube. The (mostly) Dutch group got a nice reaction from an enthusiastic house, many of whom knew the three-part signature moves from the video (cross arms, salute, then point), something I’ve been torturing Chris with for several weeks. BearForce1 seems to be positioning themselves as a 21st century Village People. Besides performing their hit (twice), they covered Frankie’s Relax and YMCA.