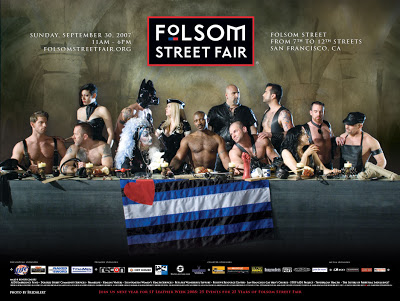 Xtians On Warpath Over Folsom Poster Last month I mentioned Folsom Street Fair’s fabulous “Last Supper” poster for this year’s event. Now Matt Barber, alpha male for the mousy Xtian hausfraus advocacy group, the Concerned Women For America (CWA), is up in arms, petitioning House Speaker Nancy Pelosi (D-SF), California Senators Barbara Boxer and Diane Feinstein, and Gov. Schwarzengger to “publicly condemn this unprovoked attack against Christ and His followers. We further challenge the media to cover this affront to Christianity with the same vigor as recent stories about cartoon depictions of Mohammed and other items offensive to the Muslim community.” More from CWA:

Organizers of San Francisco’s hedonistic Folsom Street Fair — sponsored by Miller Brewing, Co. — have portrayed Christ and His disciples as half-naked homosexual sadomasochists in the event’s promotional advertisement. The bread and wine representing Christ’s broken body and lifegiving blood are replaced with sadomasochistic sex toys in this twisted version of Da Vinci’s The Last Supper.The most unimaginable and vile acts of debauchery are commonplace during the fair. Senator Larry Craig was arrested and driven out of the Senate for allegedly soliciting public ‘gay’ sex, yet during this event the city of San Francisco suspends the law and allows ‘gay’ men and women to parade the streets fully nude, many having sex — even group orgies — in broad daylight, while taxpayer funded police officers look on and do absolutely nothing.

The mainstream media should cover this event with cameras in hand. There’s an unbelievable news story here. The Folsom Street Fair is reminiscent of Biblical Sodom and Gomorrah, and the media should document exactly what the city of San Francisco is allowing to occur – in public – in the name of “tolerance.”

Wow, I bet the CWA just bumped attendance at the fair up a notch. And I’m proud to note that there’s a few of my friends and JMG readers in that poster, including somebody on my blogroll. Sacrilege is hot.

UPDATE: Head on over to Dan Savage for an exhaustive display of many previous pop culture takes on The Last Supper, such as by The Simpsons, The Sopranos, Star Wars, Sesame Street and many others. Savage says, “Where is the outrage?”