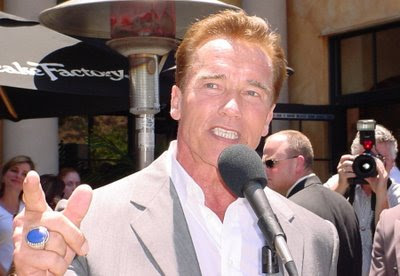 IMPORTANT UPDATE: Marriage Equality has posted a list of cities across California who are also staging marches and rallies on Tuesday, September 18th. Click here to find your city and where to stage for the demonstration. Don’t Do A Veto Sequel!

To urge Gov. Arnold Schwarzenegger to sign legislation ending discrimination against gay and lesbian couples who wish to marry their partners, hundreds of supporters of marriage equality will rally at the L.A. Gay & Lesbian Center and march down Hollywood Blvd. to Schwarzenegger’s star on the Hollywood Walk of Fame.

The California legislature has again passed historic legislation that would end the state’s discriminatory practice of denying gay men and lesbians the right to marry and Gov. Schwarzenegger is slated to get the bill this week. In 2005, the governor sacrificed the civil rights of an entire community to appease the most right-wing elements of his party and vetoed the measure. This year, the LGBT community, its allies and fair-minded citizens through the state are urging him not to do a “veto sequel!” and to respect the will of the people as represented through the legislature.

Veteran gay reporter Rex Wockner has posted an eloquent letter to the Governator, asking him to consider his legacy, especially in light of a recent embarrassment suffered by former Gov. Pete Wilson at his statue unveiling, where gay and Latino activists showed up by the hundreds to jeer. An excerpt:

[W]hen the history books are written, Governor, the anti-gay bigots are going to be remembered in the same way we remember racists today. As an embarrassment from a less-enlightened, less-evolved era of U.S. history. I know you don’t want to be in the same chapter as George Wallace in a textbook students will read 50 years from now.

Read the rest of Wockner’s letter. And if you are in Southern California tomorrow, please consider attending the march and rally. In Hollywood, perhaps more than anywhere else, good PR works.

Previous ACLU Gets Behind Larry Craig
Next Brett Somers, 83