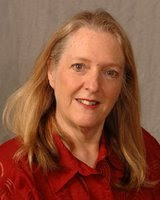 Via Michelangelo Signorile, I’ve been following the unfolding story about the latest revelations regarding the personal life of Secretary of State Condeleeza Rice. On Thursday’s SiriusOutQ show, Signorile hosted Glenn Kessler, author of The Confidante: Condoleeza Rice And The Creation Of The Bush Legacy, in which Kessler uncovers some heretofore unknown details of Rice’s closely guarded private life.

According to Kessler, Rice’s closest male friend is Coit D. Blacker, an openly gay political science professor at Stanford (where Rice served as provost for six year on the ’90s) and a Democrat who served in the Clinton administration. To paraphrase Signorile, them there’s some strange bedfellows, considering Blacker’s “best friend” works for a man who’s trying to write his second-class citizenship in the Constitution.

But even more intriguing is the revelation that Rice owns a house and shares a line of credit with a woman named Randy Bean (pictured), an unmarried liberal filmmaker who also works at Stanford and once worked for Bill Moyers. Kessler found the house ownership information by researching real estate records. In the book, Bean explains that Blacker and Rice helped her buy the house because Bean had suffered financial setbacks due to medical bills. Blacker later sold his share of the house to the two women with Rice later helping establish the credit line to fund renovations of the home.

Where to begin? For the record, in the book Kessler goes into the long-discussed rumors about Rice and the few times her sexual orientation has been gossiped about or discussed in the media, but he also talks about how single, older (heterosexual) women often “unfairly” have their sexual orientation questioned, and says in the book that Rice has been the target of “nasty attacks” in this regard. He mentions that she was linked to a man once — back in college. Even if Rice is heterosexual, however, it is fascinating and mind-boggling that this woman whose best male friend is an openly gay liberal and whose best female “friend” is a “liberal progressive,” would work for a president who has opposed every gay rights initiative and tried to enshrine religious hatred in the Constitution. What does it say about them as well?

It will be very interesting to see if the mainstream media touches this story. So far, I’ve only seen it on gay and leftist blogs, all of whom reference the Signorile piece.