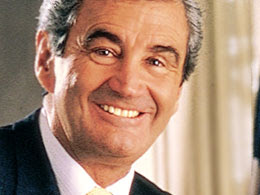 Kennedy was one of the most notorious rabidly anti-gay fundamentalists in the nation, regularly ranting against gay rights in his weekly tv and radio shows, which reached millions. In 2004, he co-wrote a book called, What’s Wrong With Same-Sex Marriage? Kennedy also produced a television documentary which claimed that Charles Darwin’s theory of evolution influenced Adolf Hitler and caused the Holocaust. Two months ago, Kennedy sent 33,000 petitions to Congress to fight the Matthew Shepard Act.

Some choice quotes from Kennedy:

“Not all the educators in our public schools and universities are deliberately deceitful, not all of them want to destroy this nation, but many do. The major teachers’ unions certainly do.”

“Christians did not start the culture war but…we are going to end it. That is a fact, and the Bible assures us of victory.”

“Tolerance is the last virtue of a depraved society. When you have an immoral society that has blatantly, proudly, violated all of the commandments of God, there is one last virtue they insist upon: tolerance for their immorality.”

I have always found it interesting that before Kennedy became a fundie, he was a dance instructor. Ahem.