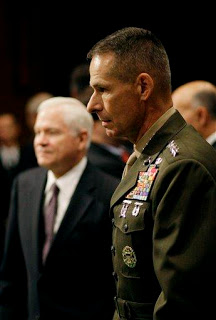 His retirement mere days away, Gen. Peter Pace, chairman of the Joint Chiefs of Staff, felt emboldened to make a final parting shot at the gays during a defense appropriations hearing after Sen. Tom Harkin (D-IA) said he found Pace’s previous comments on gays in the military to be be hurtful and demoralizing.

Pace responded, “Are there wonderful Americans who happen to be homosexual serving in the military? Yes. We need to be very precise then, about what I said wearing my stars and being very conscious of it. And that is, very simply, that we should respect those who want to serve the nation but not through the law of the land, condone activity that, in my upbringing, is counter to God’s law.”

Anti-war protesters at the hearing yelled “bigot!” at Pace and jeered him before the room was cleared of spectators. After the meeting resumed, Pace added that he would “very willing and able and supportive” to changes to the DADT policy “to continue to allow the homosexual community to contribute to the nation without condoning what I believe to be activity – whether it to be heterosexual or homosexual – that in my upbringing is not right.” Um, what the fuck does that mean? Gays can contribute, but can’t be condoned? Huh? Isn’t that where we are right now with DADT?

In March of this year, Pace declared that he found homosexuals innately “immoral”, spawning a massive round of protests by progressive organizations. National Gay & Lesbian Task Force head Matt Foreman was arrested [photos] at a Times Square military recruiting station sit-in attended by many prominent gay activists, which made national news. Then Hillary Clinton earned the ire of gay activists when she took her sweet time in disavowing Pace’s comments. In June, Pace announced his retirement, which some took as an indicator that Republicans considered him a liability in the upcoming election.