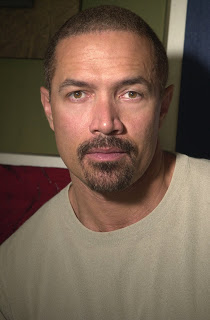 UPDATE: Here’s the NY Times review of the concert. An excerpt: “[T]he program concluded with Michael Abels’s energetic arrangement for string quartet and string orchestra of his ‘Delights and Dances,’ which incorporates jazz, blues, bluegrass and Latino dance elements. The Harlem Quartet played with panache.”

Last night Dr. Jeff and I had the privilege of attending composer Michael Abels‘ spectacular Carnegie Hall debut. Abels is a regular JMG reader and commenter and I was floored to be invited to make my first-ever Carnegie Hall visit as the guest of the composer whose work was being played there for the first time, not to mention being being seated in his box. Fancy! Adding to the evening’s glamor, we were joined by noted HIV activist and gymnast/acrobat Matthew Cusick.

Last night’s event, Sphinx Laureates, was a special evening presented by the Sphinx Organization, which was founded by Aaron Dworkin and works nationwide to foster involvement in and appreciation of classical music by black and Latino students. Led by Maestro Chelsea Tipton II, performers last night included the Sphinx Chamber Orchestra and the Harlem Quartet, both comprised of top alumni of Sphinx competitions for young black and Latino string players.

Michael Abels, 43, tells me that he has been composing music since the age of 12. His new piece, the 13 minute-long Delights And Dances, was the grand finale of the evening and featured the Harlem Quartet playing in front of the string orchestra. As I told Michael, I’ve got about as much knowledge of classical music as I do of nuclear reactors, but I can say that Dr. Jeff and I absolutely loved his piece, which built and built and built with little funky bluegrassy bits thrown in until the big finish brought the entire audience to their feet for the only time all night.

In fact, the audience kind of went a little crazy, especially when they brought Michael out on the stage to take his bows. If only I could knowledgeably praise Michael Abels’ work, I’d gush much more. For now, stand by for the Harlem String Quartet’s recording of Delights And Dances, which is due out in January. I’ll give y’all a reminder then.

BELOW: Michael Abels, second from left in the front row, takes his bows.