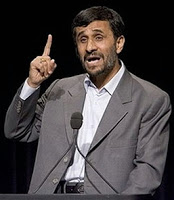 Ahmandinejad: “We Have No Homos In Iran” Iran president Mahmoud Ahmadinejad spoke at Columbia University today at their World Leaders Forum as hundreds of vocal protesters marched outside the venue in a media firestorm. Last week, Ahmandinejad spurred outrage when he requested permission to lay a wreath at Ground Zero. His request was denied.

The Iranian dictator’s invitation to speak at Columbia launched a nationwide controversy on the issue of free speech, prompting Columbia president Lee Bollinger to preface Ahmadinejad’s speech by calling him “petty and cruel” but saying “We do not honor the dishonorable when we open our public forum to their voices.”

Inside the venue, there were no disruptions of the speech as students sat quietly. The only reaction came when Ahmandinejad, speaking in Farsi, said, “In Iran, we don’t have homosexuals like in your country. We don’t have that in our country. In Iran, we do not have this phenomenon. I do not know who has told you that we have it.” The audience responded with boos and laughter. Of course, what Ahmandinejad didn’t say was that he keeps Iran free of homosexuals by killing them.

Before the speech, Bill Clinton said he generally supported Admandinejad’s appearance, saying he thought it was a valuable learning experience for Columbia’s students and that allowing him to speak “speaks volumes about, really, the greatness of America.” What do you think? Should Columbia have invited Admandinejad?