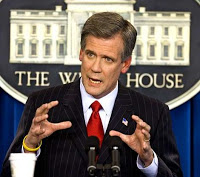 White House Press Secretary Tony Snow announced his resignation today, effective Sept. 14th. Snow’s resignation has been expected for weeks as he has mentioned recently that his government salary is inadequate. Snow is also suffering from cancer.

Some blogs are buzzing that Snow stepped up his stepping down as a Republican ploy to help smother the potential news of Larry Craig’s resignation. Likewise, some think that Craig’s arrest was finally leaked on Monday (months after it occurred) to squash the news of Alberto Gonazales’ resignation. That seems rather likely. The media has gone 24/7 on Craig, with the Gonzales story left in the dust.