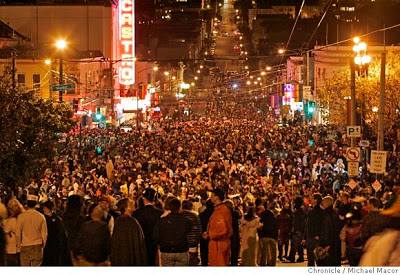 In the wake of last year’s event during which nine people were shot, San Francisco has “cancelled” the Castro’s massive annual Halloween event which typically draws over 500,000 to the gayborhood. Audrey Joseph, former owner of the now-razed dance emporium, Universe, now the head of the City Entertainment Commission, says, “There will be no party.”

SF Supervisor Bevan Dufty: “It’s not a holiday in the Castro. It’s a night in which the neighborhood is overrun by people who come to gawk, not celebrate, and unfortunately it turns into gang night out in the Castro.” Many gays have avoided the Castro Halloween event for years, as the annual invasion of violent teenagers and feuding gangs have turned the former landmark gay celebration into a night of taunts and intimidation. Not to mention the shootings and stabbings.

However, the city has previously attempted to end Halloween in the Castro, most notably with a failed counter-event at Civic Center Plaza. With no way to actually stop people from coming into the Castro, this year city leaders are imploring local bars and businesses to close for the day. I suspect this will have scant effect. There are always plenty of covert beer vendors roaming the streets during the night, ready to fuel the inevitable.