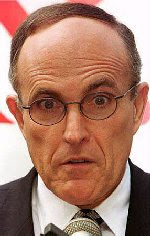 Newsday: Giuliani Tops In Gay Rights
The Gays: What Is Newsday Smoking? An article in today’s Newsday contends that Rudy Giuliani has “done more for gay rights than any candidate.”

Twenty-five years ago, long before Rudy Giuliani became mayor of New York City, he made a decision that advanced the cause of gay rights nationally. As the Justice Department’s number three official in 1982, Giuliani authorized the hiring of the first openly gay lawyer for a prosecutor post requiring a security clearance, according to records and interviews.That precedent-setting but little-known action, combined with his successful push as mayor for domestic partnership and hate crime laws in New York, make Giuliani an anomaly: a front-runner for the GOP nomination who is a top champion of gay rights.

National Gay & Lesbian Task Force head Matt Foreman agrees, saying, “The challenge for those of us in the gay rights movement is to look at two things: an elected official’s accomplishment while in office and whether they affirm the humanity of gay people. On that score, Mayor Giuliani has a good record.” However, Foreman adds, “Everything with Rudy Giuliani comes with this double-edged sword, including his vindictiveness and his terrible relations with people of color.”

Giuliani opposes the repeal of DADT and gay marriage, but supports ENDA. Aside from the havoc he wreaked upon NYC (nightlife issues, the 9/11 preparedness debacle), one out of three ain’t good enough to pass the laugh test. But tell that to the Log Cabinettes, who manage to have their heads up Rudy’s ass and their own. Giuliani does deserve some cred for what he accomplished in NYC and that will cost him in the campaign. But being the best of the worst is no reason for anything but faint applause.