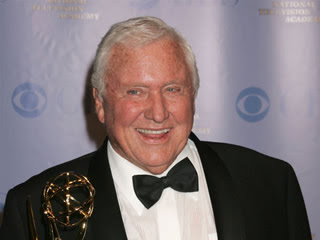 Merv Griffin, the quietly gay legendary talk show host, entrepreneur, and game show creator, died of prostate cancer this weekend. The creator of Jeopardy! and Wheel Of Fortune, Griffin made billions, occasionally landing on Forbes list of the world’s richest men. Married in 1958, divorcing 15 years and one son later, Griffin was well-known to be gay, although he kept his gayness very private, only telling the press that, “I am quatre-sexual. I’ll do anything for a quarter.” In 1991, Griffin was sued for sexual harassment by Dance Fever host Denny Terio. That same year, a personal bodyguard sued for $200M in palimony. Both suits were dismissed.

When Merv’s afternoon talk show was on in ’70s, I was a regular viewer, particularly enjoying his frequent guests Charo and Totie Fields and his repartee’ with his faithful audience member, Mrs. Miller. Merv would open the show by displaying the linings of his custom jackets, always accompanied by his trademarked (and frequently parodied) expression, “Oooooooooooh.” I was always a little disappointed that a powerful man like Merv never became a gay advocate, but he did always handle the press with humor and dignity.

TRIVIA: Merv had a huge hit on the pop charts in 1949 with I’ve Got A Lovely Bunch Of Coconuts. The single sold 3 million copies.

UPDATE: Michelanglo Signorile has a rather blistering opinion of Griffin, mentioning his close affiliation with the Reagans and his purported habit of firing openly gay employees. Signorile has me rethinking my fond memories of Merv Griffin.

Previous Morning View –
Manhattan Bridge Exit
Next Hey! What’s That Bright Stuff
At The End Of This Tunnel?