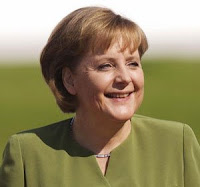 Forbes has published their annual list of the most powerful women in the world. German Chancellor Angela Merkel tops the list for the second year in a row, but Condoleeza Rice falls to #4. Oprah’s at #21, Hillary at #25, Nancy Pelosi at #26. Rankings are calculated based on a composite of visibility (based on press mentions) and economic impact (based on a complex formula of job title and company sales or assets.) Here’s the rest of the top ten: