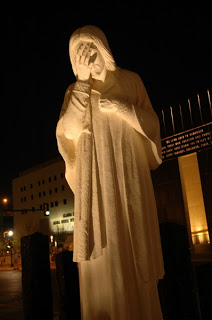 Love The Sinner, Hate The Service Gay blogs are buzzing with outrage today over an Arlington, Texas church’s cancellation of the funeral of a gay man. The High Point Church cancelled the service, planned for Wednesday, after viewing memorial photos of the deceased hugging and kissing male friends.

Towleroad reports: [Reverend Gary] Simons defended his decision to renege on the offer to his congregation on Sunday, and reportedly received a hearty round of applause. Said Simons: “This decision was not based on hate, or discrimination, but upon principle and policy. We cannot glorify homosexuality as a lifestyle.”

Pam Spaulding quotes the church further: “We did decline to host the service – not based on hatred, not based on discrimination, but based on principle. Had we known it on the day they first spoke about it – yes, we would have declined then. It’s not that we didn’t love the family. Even though we could not condone that lifestyle, we went above and beyond for the family through many acts of love and kindness.”– Rev. Gary Simons, minister at High Point Church in Arlington, justifying the church’s decision.

The dead man’s partner posted a lengthy comment on Box Turtle Bulletin which reads in part: “First of all, let me start by stating that it was a member of the church who offered the use of their facility to us, on behalf of his brother who is/was a member of their congregation. I was introduced to this man as Cecil’s partner. To my knowledge, this person at least was fully aware that we were living openly as a couple. This same member of the church, when were later advised that we could not use the facilities, on his own, with money from his own pocket, not church coffers, went and procured another facility for the funeral. The church did not do so. At no time did a member of the church contact us to indicate that they had a problem with any part of the service we were planning. We never had contact with the minister or any of the administration.”

Nothing about any of this is surprising to me. Increasingly, I find myself numbed to Christianist outrages.