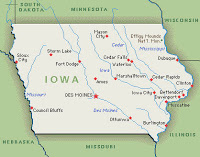 An Iowa judge struck down that state’s Defense of Marriage Act today, ruling it unconstitutional. Lambda Legal and Iowa’s former counsel general represented six couples denied marriage licenses in 2005, arguing that under equal access and due process guarantees in Iowa’s state constitution, the couples should not have been barred from marrying. The Iowa Civil Liberties Union and others filed “friends of the court” briefs supporting the gay couples’ case, which is likely headed for the Iowa Supreme Court.