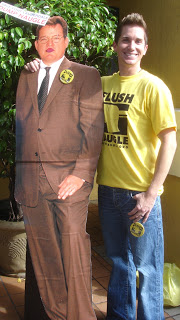 On The Scene At Flush Naugle Rally Roving JMG reporter Father Tony is in Fort Lauderdale where he dropped in at the Unite Fort Lauderdale-sponsored Flush Naugle rally in the parking lot of the Shoppes of Wilton Manors, Fort Lauderdale’s all-gay shopping center. Local activists are demanding the Major Jim “Robo-john” Naugle either step down or apologize for his anti-gay statements.

At the rally, Tony interviewed Waymon Hudson (left), president of Fight Out Loud, a fledging gay activist group born of the infamous “death to homosexuals” intercom announcement made at Fort Lauderdale International. Hudson and his partner were at the airport when the announcement was made and through their activism, a apology was made to the gay community by the mayor of Broward County and the evildoer was terminated. To contribute to the work of Fight Out Loud, follow this link.

Here’s a minute-long interview Tony did with Hudson.