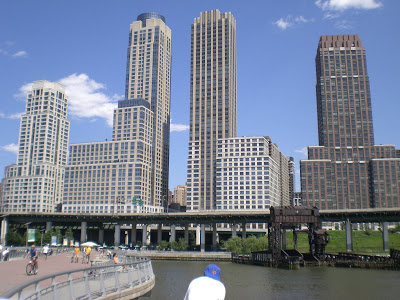 The strange saga of Trump Place began back in 1974 when Donald Trump optioned the old New York Central freight train yard on the Upper West Side between 59th and 72nd Streets. In ’87, Trump proposed a massive development to be called “Television City”, where NBC could relocate and where he’d build the world’s tallest building, a 157-story tower to be designed by Helmet Jahn. The huge size of the complex was strongly opposed by city activists and NBC ended up renewing their commitment to Rockefeller Center. When Trump nearly went backrupt in the early ’90s, he sold the land to Hong Kong investors with the stipulation that his name remain on any properties built there. The bland luxury apartment buildings you see here are all that have been built so far. And of course, they are sold out.