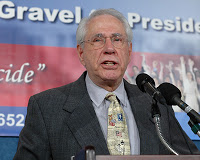 The HRC has relented and given Sen. Mike Gravel a belated invitation to join their upcoming presidential debate to be aired live on LOGO. Last week Gravel wrote a Huffington Post column blasting his exclusion and with the support of some LGBT bloggers, the HRC reconsidered. Today Gravel wrote an open letter of thanks to the gay community for backing his attendance at the debate. While Gravel is a marginal candidate at best – and having met the man, I think that’s a good thing – he remains the sole presidential candidate that fully supports marriage equality. I’m sure he’ll call out the others on that during the debate, and that too will be a good thing. The debate takes place August 9th at 6pm and has been extended to 90 minutes.