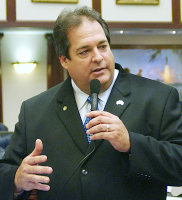 “I’m not in anyway associated with that they are saying, this is disgusting.” – Florida state representative Bob Allen (R-Merritt Island), shortly after he was arrested for soliciting a male undercover cop for sex in a Titusville park restroom. The busted pol allegedly offered $20 if the cop would let Allen blow him.

Because we both went to UCF and because he (unfortunately) is the state House representative for several of my friends in my hometown of Orlando, I’ve been following Bob Allen’s shenanigans for some time.

Laugh #2: Allen, who is listed as co-chair for John McCain’s Florida campaign, was first elected to the Florida House in 2000, is married with one daughter, and lists his recreational interest as “water sports”. Hmm, he doesn’t look like he skis.

Laugh #3: In 2005, Allen told right-wing Christian site World Net Daily about his “Sexual Predators Elimination Act” which sought mandatory life without parole sentences for those designated as sexual predators. Allen’s now-ironic statement to WND: “We can get away from all those expensive law-enforcement time-wasting factors by simply going straight to the root of the problem, and that is the offender, and put them in a locked up place where we know we’re safe.” The bill was strongly opposed by the Florida ACLU and did not pass.

Laugh #4: The Central Florida Rainbow Democratic Club, which rates policitians using their unique Wizard of Oz-based scale, ranks Bob Allen as a “Wicked Witch”, the “absolute worst of the worst”.

Laugh #5: The photo credit for the above pic, taken from the Florida House site, goes to one “Mark Foley.” I mean, I’m sure it’s not THAT Mark Foley, but still – it made me laugh.

In April, Allen earned the enmity of Florida’s gun lobby when he betrayed them over the “Guns In The Parking Lot” bill (officially HB 1417, the Individual Personal Private Property Protection Act of 2007) which was meant to prohibit businesses from banning customers and employees from keeping guns in their parked cars. Yeah, you read that right. The NRA wanted to prevent businesses from preventing people with guns from parking in their lots.

Allen co-sponsored the bill, then voted “no” on it, aiding its defeat. The bill was ostensibly written to protect employees from “corporate giants” who (according to former NRA head Marion Hammer) “have randomly searched private vehicles in their parking lots, without probable cause, under the pretense of searching for “contraband” – which covers anything they choose – and subsequently fired employees who had firearms in their private motor vehicles.” Allen claimed that the bill (written by Marion Hammer) did not go far enough in protecting gun owners and submitted his own version of the bill titled the “True Gun Bill”. He was the only one to vote for his bill.

Allen has been positioning himself as even more of a right-wing nut than the Republican state senator whose seat he is, ahem, now gunning for. Obviously, his arrest as a wannabe cocksucker puts all of those plans of Ol’ Sex & Guns in jeopardy.

Couldn’t happen to a nicer guy.
.