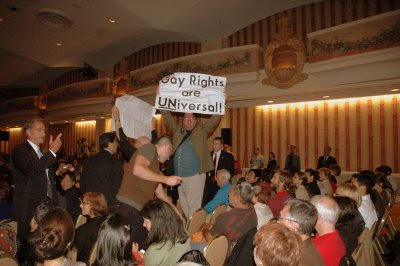 General Ban responded, “That is most unusual welcome for me . . . As Secretary General, I’m supposed to answer all questions . . . The gay rights issue is very sensitive.”

Petrelis: “The UN has been silent for far too long, as our gay brothers and lesbian sisters are aggressively selected for human rights violations, torture and execution across the globe, simply due to their sexual orientation.” A global day of solidarity for LGBT people is planned for August 4th. The NYC event is being organized by veteran activist Brendan Fay and I will attend.

Previous Clinton V. Obama
Next A Message From Fort Lauderdale