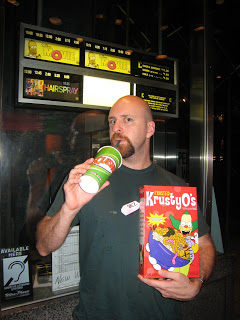 Spiderpig, Spiderpig
Does whatever
A Spiderpig does
Can he swing
From a web
No he can’t
He’s a pig
Look ouuuuut
He is a Spiderpig

Last night, with Squishees and KrustyO’s in hand, Dr. Jeff and I attended the midnight screening of The Simpsons. On the walk home from the City Cinema on 86th Street (strongly disrecommended by the way) Dr. Jeff threatened me with physical harm if I gave away any The Simpsons’ jokes in this review.

So let me just say that almost all your favorite characters get screen time, all the usual Simpsons targets are skewered (politicians, Fox, Disney, the church, preachy environmentalists), and the usual so-earnest-it’s-funny ending is provided. The animation is great with a fair amount of CGI, but nothing is so jarring that it felt unSimpsonian. Still, with all that familiarity, there was a decent story arc and you didn’t feel like you were watching four episodes strung together. The nudity and swearing helped.

The major celebrity voice of the film is provided by Albert Brooks (curiously credited as A. Brooks), and another mega-celebrity plays himself. Of course, Dr. Jeff and I stayed until the last moment of the credits with all the other Simpsons geeks, some of whom weren’t born when the show began. Jeff gives The Simpsons a B+, probably due to the absence of his beloved Kang and Kodos. I give it an A-. I’ll probably see it again this weekend just to catch up on the jokes I missed last night.

Previous There’s No Basement In Sparta
Next Broadway Friday