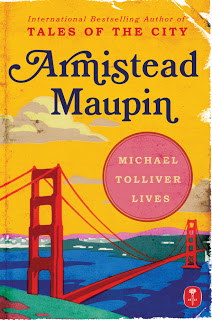 This week’s Swag Tuesday booty is perhaps the most hotly anticipated gay lit release of the year, Armisted Maupin’s Michael Tolliver Lives, out today from HarperCollins. Is there any other series of gay books more beloved than Tales Of The City? It doesn’t seem possible.

Maupin denies that this is a seventh volume of his beloved Tales of the City, but—happily—that’s exactly what it is, with style and invention galore. When we left the residents of 28 Barbary Lane, it was 1989, and Michael “Mouse” Tolliver was coping with the supposed death sentence of HIV. Now, improved drug cocktails have given him a new life, while regular shots of testosterone and doses of Viagra allow him a rich and inventive sex life with a new boyfriend, Ben, “twenty-one years younger than I am—an entire adult younger, if you must insist on looking at it that way.” Number 28 Barbary Lane itself is no more, but its former tenants are doing well, for the most part, in diaspora. Michael’s best friend, ladies’ man Brian Hawkins, is back, and unprepared for his grown daughter, Shawna, a pansexual it-girl journalist à la Michelle Tea, to leave for a New York career. Mrs. Madrigal, the transsexual landlady, is still radiant and mysterious at age 85. Maupin introduces a dazzling variety of real-life reference points, but the story belongs to Mouse, whose chartings of the transgressive, multigendered sex trends of San Francisco are every bit as lovable as Mouse’s original wet jockey shorts contest in the very first Tales, back in 1978.

I’ve met Maupin a couple times, the first time in 1994, as he and the original cast of Tales From The City were running to join the Stonewall 25 Pride March here in NYC. Maupin was quite gracious, introducing me to the cast, whom I largely ignored as I stood in the middle of 5th Avenue, starstruck by Maupin himself. I’m still kicking myself for not paying more attention to the actors. I still have Maupin’s autograph from that encounter, which he gave me on the back of a Waldolf-Astoria postcard, the only thing I had on me.

Today is “Michael Tolliver Day” in San Francisco, where Armisted Maupin will be reading from Michael Tolliver Lives at Books, Inc. in Opera Plaza. Thanks go out to HarperCollins for participating in Swag Tuesday on JMG. Enter to win a copy of Micheal Tolliver Lives by commenting on this post. Only your first post counts and please remember to leave your email address. Publicists: if you’d like to take part in Swag Tuesday, please email me.